Who Is Julie Cope? 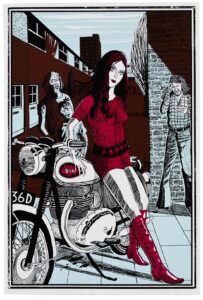 Our new acquisition Six Snapshots of Julie features scenes from the life of one fictional character, Julie Cope. Grayson Perry described her as an “Essex Everywoman” and aside from prints she’s also featured in his tapestries, poetry and ceramics. She’s even inspired a building: Perry’s A House For Essex, which you may have seen being constructed in his 2015 TV programme’ Grayson Perry’s Dream House’.

Perry uses Julie Cope as a cipher through which to celebrate the “trials, tribulations, celebrations and mistakes of an average life”. Cope’s life has been mapped out in great detail by Perry and is rooted in the small towns of Essex, reflecting the economic, educational and aspirational shifts which have been particularly experienced by the Baby Boomer generation. Julie Cope was born 1953, married twice (with two children from her first marriage to Dave) and finds self-fulfilment at different stages through her adult life before meeting a sad and untimely end when hit by a motorcycle.


Here’s what Grayson Perry has to say about the work:

“I made six prints, one for each decade of Julie’s life. The first one shows her as a young girl on Canvey Island, as it might have looked in the 1950s, with flimsy bungalows, telegraph poles and the refinery belching smoke in the distance. The second is her in a council estate in Basildon, a sexy young rock chick in her hot pants and boots, leaning on a motorbike – a premonition of her own death, perhaps. In the third scene, she’s a young mother picnicking with her two kids in the park. That’s my favourite image, because it captures the poignant trapped feeling of that situation. She was still in her relationship with Dave at the time, but there’s a row of houses in the background and it’s all a bit Larkinesque; I was very much trying to pick up on the atmosphere in Larkin’s poem ‘Afternoon’ where he talks about the young parents in the park: ‘Before them, the wind / Is ruining their courting-places […] Something is pushing them / To the side of their own lives.’ 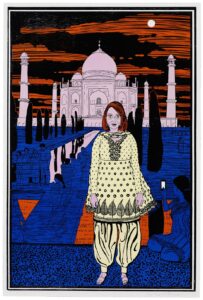 The fourth image shows Julie with one of her workmates, out on the piss. It’s like a photo-booth portrait of them from the time she’s working as a social worker. The fifth print is a picture of her second wedding. Julie’s got flowers in her hair, and both she and Rob are looking a bit dumpy and middle-aged by now. The final picture is her in front of the Taj Mahal, on one of their trips. When Rob finds that photo after her death, he remembers how he’d promised her that ‘if she

died / He would then grieve as deep as Shah Jahan / And build a Taj Mahal upon the Stour’ – a promise which ends in this house being built as her shrine.

I used a set of these prints in black and white as wallpaper on the ceiling of the main room in the house. They are made from blocks cut by a computer-controlled router: they were the first woodcut prints I’ve ever made and I really like the effect of them.”

“Biographical” information on Julie Cope based on The Ballad of Julie Cope by Grayson Perry.