The Williamson opened as a purpose-built gallery & museum in December 1928. It is home to the vast majority of Wirral’s collection of artistic and historic works. The galleries are varied and well-proportioned for their subject, and aim to represent several aspects of Wirral and Birkenhead history.

Birkenhead was very much a Victorian ‘new town’, developing hugely during the years of the 19th century. The oldest buildings in the town date back to 1150. They include Birkenhead Priory a Benedictine monastery that survived until 1536 when King Henry VIII began the closure of all monasteries throughout England and Wales. The Priory is now popular as sister site to the Williamson Art Gallery and Museum.

Once the monastery had closed the land was farmed by a series of Lords of the Manor, who also had the rights to operate the ferry. There was, however, no more than a sparse scattering of houses in Birkenhead. The growth of Liverpool to one of England’s major ports mostly took place during the 18th century. Once the first steam ferry ran across the Mersey in 1817, it became easier for Liverpool merchants to travel over the river to Liverpool’s centre than by road from the outskirts of the town. Thus the growth of Birkenhead began.

At first hotels and large houses developed, but the potential of Birkenhead as an industrial centre was seen by Scottish engineer William Laird who bought land and in 1824 opened a boiler works which later became a ship yard.  Now the town grew rapidly, and it became a visionary and exciting place to be: 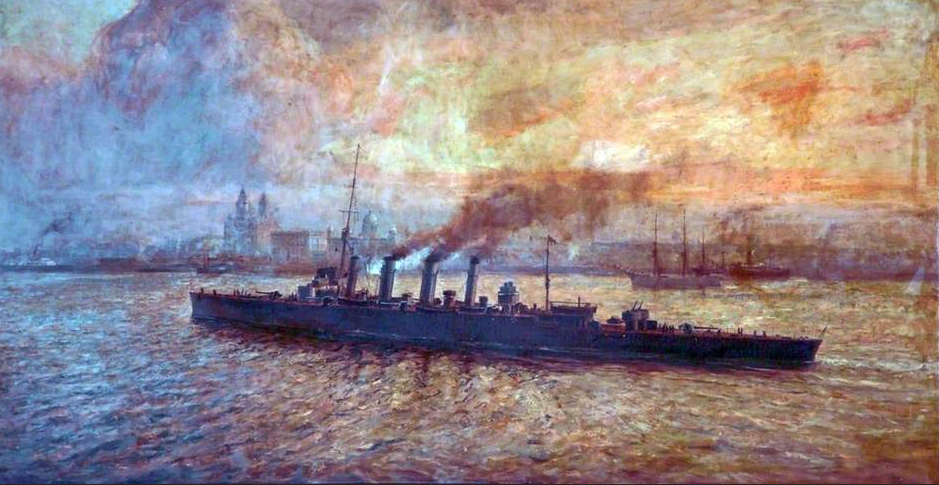 “London is a modern Babylon; Paris has aped imperial Rome, and may share its catastrophe.  But what do the sages say to DAMASCUS?…it still exists and still flourishes; is full of life, wealth and enjoyment.  Here is a city that has quaffed the magical elixir and secured the philosopher’s stone, that is always young and always rich.  As yet, the disciples of progress have not been able exactly to match this instance of Damascus, but it is said that they have great faith in the future of BIRKENHEAD.”  (Tancred, Benjamin Disraeli)

In 1847 Birkenhead Park opened as the first purpose-built public park in the world; in 1860, Birkenhead introduced the first public tramway in Europe.  The docks expanded and, in partnership with Liverpool, traded across the globe. And Laird’s shipbuilders (later Cammell Laird) became one of the most important ship yards in the world, building for private, commercial and naval clients.

It was in this atmosphere of enterprise that the intellectuals of the town felt a museum and art gallery was important for the prestige of Birkenhead. History was already being preserved: in the 1890’s the ruins of Birkenhead Priory were bought by public subscription, fully restored and presented to the Borough Council.

The first building for a museum and art gallery came available in 1909 with the opening of a new Public Library, funded by Andrew Carnegie, the Scottish philanthropist. With the old library now vacant, the Birkenhead Art Club, which had many rich and influential members – many of them town councillors – brought pressure to bear. The old library was converted in 1912, and a collection began to be formed. The Mayor of Birkenhead, A.W. Willmer, from the family that owned the town’s principal newspaper the Birkenhead News, devoted his £500 mayor’s salary to the purchase of paintings for the new art gallery and many of the ‘great and good’ gave items from their own collections.

Some significant paintings had already been presented to the town for exhibition in the magnificent Town Hall in Hamilton Square.  These included T.S. Cooper’s huge vision of the Battle of Waterloo, painted in 1847, and the one-time Royal Academy president C.L. Eastlake’s Brutus exhorting the Romans to revenge the death of Lucretia, painted early in his career in 1813 and severely neo-classical. Both of these were given to the town by John Williamson, a Scottish-born Birkenhead resident who made his considerable wealth from shipping, insurance and trade with South America, and as a director of the Cunard shipping line.

The Williamson's Beginnings and Collection

It was a bequest from Williamson, and a further one from his son Patrick, that gave Birkenhead the money to build a new art gallery to replace the converted library.

Opened in 1928 the Williamson Art Gallery & Museum – named after its benefactors – is a single-storey, unobtrusive classical building, mainly in red brick with Corinthian columns and pilasters. It is not in the town centre, in a grand square or even a park, but is in the residential suburb of Oxton. This made it convenient for its intended middle-class audience and, in fact, places it geographically in Birkenhead’s centre.

Unassuming the building may be, but it offers a great deal of room in its 14 galleries. It was designed without windows to maximise display space (with discrete top lighting with blinds) and – almost unique for its date – a system of humidifying the galleries to protect the works of art. The building was intended primarily as an Art Gallery, with the hope that money would become available at a later date to extend and provide the Museum display space, which of course never happened.

The collection that was moved in to the new gallery had developed considerably since its inception. There was in Liverpool and around an important group of Pre-Raphaelite artists, heavily collected by local patrons who gave generously to both the Walker Art Gallery in Liverpool and the Williamson. 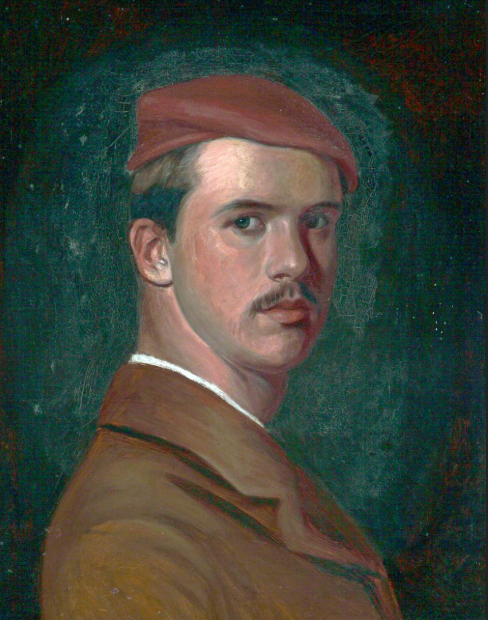 Birkenhead has never purchased a great many works by artists of real national or international significance, unless they have strong local connections, except in the field of watercolours. This was particularly influenced by Dr S.H. Nazeby Harrington, Deputy Chairman of the Libraries, Museum & Arts Committee of Birkenhead Borough Council, who collected and wrote about art himself. Particularly in the 1920’s and 1930’s a huge number of British watercolours was purchased, in an effort to make the collection as comprehensive as possible. Efforts were always made to cast the net as wide as possible, to be inclusive rather than exclusive, to show the range and variety of work produced in the medium. This includes some truly outstanding examples.

Less well represented is the 20th century, as the curators at that time did not feel confident in purchasing modern work. However many exhibitions of contemporary art have always been held in the galleries.

The first watercolour in the gallery collection is Henry Meynell Rheam’s Green and Blue, number 7 in the accession register, and is one of the pictures purchased out of the Birkenhead Mayor’s annuity. Rheam was an artist who had left Birkenhead to establish himself in Cornwall, then one of the most fashionable centres for British artists, but he evidently retained his reputation in his home town.

As had Philip Wilson Steer. A major oil painting was bought from Wilson Steer at this time, followed by two other paintings during his life and a very significant group from his studio sale and after. The Williamson now owns 48 paintings by Wilson Steer, by no means the largest group by a single artist but certainly unparalleled for an artist of such significance. Each phase of the artist’s work, including the oil sketch for his Self-Portrait in the Uffizi Gallery, Florence, is represented. Less well represented his French and Impressionist work, which in his lifetime was considered by many to be an aberration and not his finest work. However subsequent art historians and collectors have disagreed and it is on those few paintings, rather than the bulk of his work in all its variety, that he is today hailed as significant.

Many of the Steer paintings were acquired with the aid of the charity, the National Arts- Collections Fund, and were the gift of various members of the artist’s family.  In addition, the Contemporary Arts Society was a considerable benefactor to the Birkenhead collection, presenting the Stanley Spencer Self-Portrait and a wide range of other works of art and craft. 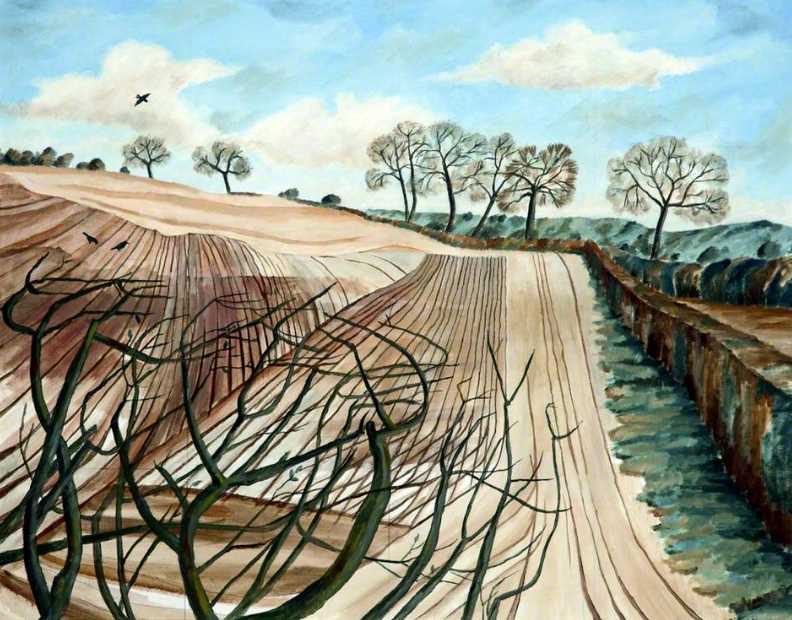 Collecting today is a rather different affair. The Curators do not now have the influence of the same kind of interested private collectors sitting on committees, who had both the personal wealth and privileged contacts to aid both the gallery’s and the collection’s development. The Williamson’s collection does however continue to extend each year, concentrating on its strengths in artists with local connections. The tier of artists that maintains a high local or regional profile, but just misses the major national and international scene, is an excellent barometer of artistic style. Artists who have been prominent on Merseyside – many of whom have been students or teachers in Liverpool or Birkenhead – are well represented. Very many of these painted extensively in North Wales, often retiring to live there, and the area’s links with galleries and artists in Wales are just as strong today. The Fine Art collection now represents these artists well, with a much smaller selection of work by the really famous names putting the majority into an art-historical context.

The collection is not purely one of Fine Art, of course. The development of the museums in Birkenhead came at a time when a generation of wealthy collectors, the merchants and professional people who had helped create the town, were dying off. Such was their civic pride that many made donations to the museum. As a result, the collection in many areas grew in a haphazard way. Oriental ceramics, West African woodcarvings, Irish glass and Cretan antiquities all figure in the collections. More important are the developments connected directly to the Merseyside area. Local ceramics include the Knowles Boney collection of Liverpool Porcelain, from the second half of the 18th century, and Della Robbia Pottery, a fascinating Arts & Crafts enterprise that operated in Birkenhead from 1893 to 1906.

Most importantly, the maritime gallery opened in 1963, which brought models, pictures and artefacts from shipping lines with offices in Liverpool together with an equivalent collection drawn from Cammell Laird and items from the history of the Mersey Ferries.

This local aspect is vitally important to the success of the Williamson in its modern role within the community. When the Metropolitan Borough of Wirral was formed in 1974, the Williamson ceased to be purely for Birkenhead and instead become the focus of artistic activity for the entire borough. The gallery’s role developed as a concert and meeting venue, which it maintains today, and the extremely active exhibition programme is the envy of many larger galleries.

Whilst most visitors are from Wirral, the reputation of the gallery is such that regular visitors come from Cheshire, North Wales and Liverpool.

Any cookies that may not be particularly necessary for the website to function and is used specifically to collect user personal data via analytics, ads, other embedded contents are termed as non-necessary cookies. It is mandatory to procure user consent prior to running these cookies on your website.